Elsie: Prairie Roses Collection Book 20
​
When Elsie Kandel's wealthy, doting father dies, leaving her free to make her own choices, along with the finances to see them through, Elsie decides it’s time to prove to herself, and everyone else, that she is more than a porcelain doll in a pretty dress. She will move west to California to live with an estranged aunt and pursue what she has secretly longed to be for as long as she can remember—a midwife.

Dr. Randolph Foster is starting over. After being falsely accused of causing the death of a wealthy man’s child, he loses his medical practice, his reputation, and his fiancé, all in one swoop. Nothing is left for him in Missouri, and when the lucrative offer to accompany two women across the plains to California on a wagon train is made to him, he sees it as an opportunity to begin again. 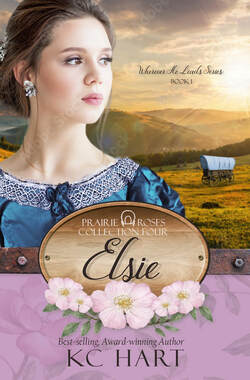 What readers are saying about Elsie.

"K C Hart is a very talented writer, and her skills shine in the story of Elsie and Dr Dolph Foster. After her father passes, Elsie realizes she finally has the opportunity to prove herself as a capable midwife . Traveling with her Nanny, she heads to California to live with her aunt. Dr Foster, reeling from being falsely accused of malpractice, accepts the position to assure her safe travels. In order to join a wagon train, they pretend they are married. Their adventures draw you into the story and true feelings develop. What will happen; however, when they reach California? This is a page turner with a great storyline, a wonderful plot, and relatable characters."​